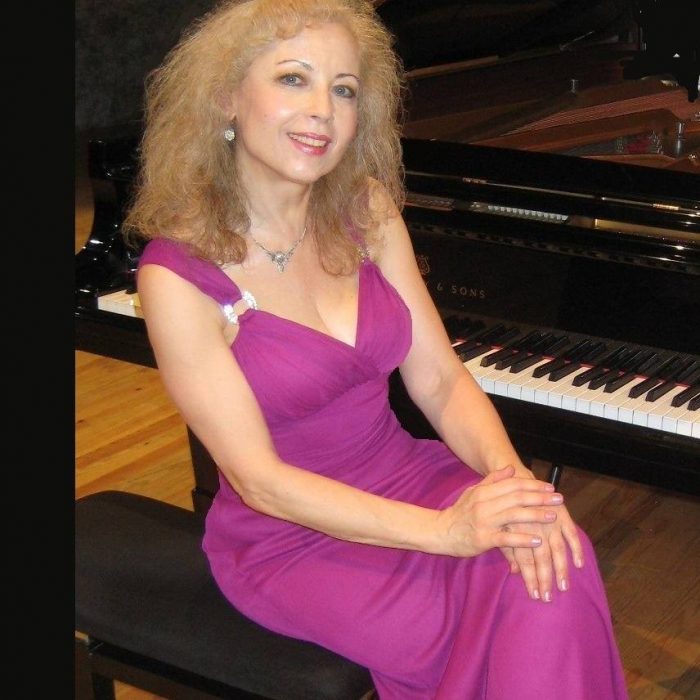 Internationally acclaimed soloist, chamber musician, recording artist and educator, Sophia Agranovich is “a bold, daring pianist in the tradition of the Golden Age Romantics…A tigress of the keyboard” – Fanfare. Her performances are captivating audiences by the “orison of uncommon beauty” – Audiophile, “the extraordinary dramatic urgency”, “the ideal balance she achieves between the intellectual and the emotional” – Fanfare, “interpretation that dares to be different”, “magnificent shading and superior musicianship” – American Record Guide.

A native of Ukraine, Sophia Agranovich won the Ukrainian Young Artists Competition at ten, being the youngest participant. At thirteen, she performed complete Concerto in E minor by Chopin in Chernovtsy, Lvov and Kiev. Her concerts were broadcasted on national TV and radio stations since she was six. Her teachers in Ukraine were professors Anna Stolarevich and Alexander Edelman, peers of Vladimir Horowitz at the Kiev Conservatory in the class of Felix Blumenfeld and later – disciples of Heinrich Neuhaus at the Moscow Conservatory. At fifteen, Ms. Agranovich entered the Juilliard School in New York City as a student of legendary professor Sascha Gorodnitzki. She also studied there with the eminent Nadia Reisenberg. a disciple of the St. Petersburg piano school of Leonid Nikolaev and student of Hofmann and Alexander Lambert – student of Franz Liszt. Ms. Agranovich earned Bachelor and Master Degrees from the Juilliard School, holding full scholarship and a Fellowship teaching Piano Minor at Juilliard, and won a First Prize in the Bergen Philharmonic Competition. She continued studies towards her Doctorate at the Columbia University, but deferred that pursuit to raise a family.

Sophia Agranovich is an esteemed pedagogue, lecturer, master class clinician, adjudicator, and is a recipient of numerous teaching awards. Her students are consistently winning top prizes in regional, national and international competitions and are performing at prestigious venues. Ms. Agranovich is active member of various professional music organizations, listed in Who’s Who in America and Who’s Who in the World, a voting member of NARAS, Artistic Director of ‘Classicals at the Circle’ music series at the Watchung Arts Center,  Program Chair and Board member of Music Educators Association of New Jersey.

Sophia Agranovich’s music education heritage is one of the most impressive today and stems from the great tradition of Western European, Russian and American schools.  In Ukraine her teachers included Anna Stolarevich and renowned professor Alexander Edelman, peer of Vladimir Horowitz at the Kiev Conservatory in the class of Felix Blumenfeld and later  – disciple of Heinrich Neuhaus at the Moscow Conservatory.

At the Juilliard School in New York, she was a student of legendary professor Sascha Gorodnitzki, who himself was a student of Josef Lhevinne (peer of Sergei Rachmaninoff and Alexander Scriabin).  She also studied with the eminent Nadia Reisenberg, a disciple of the St. Petersburg piano school of Leonid Nikolaev and student of Josef Hofmann and Alexander Lambert – student of Franz Liszt himself. Sophia also studied with David Diamond and Joseph Bloch in musicology, Felix Galimir, Paul Doktor, and Samuel Sanders  in chamber music and ensemble. Ms. Agranovich was awarded Fellowship teaching Piano Minor at Juilliard.

In her instruction methods Sophia Agranovich combines traditional Russian, Western European and American schools. She teaches overall musicianship along with music theory, music history, ensemble, accompaniment and improvisation. She stresses the connection of music and other art forms, such as literature, painting and sculpture. This helps to achieve true style and balance in performing.  Ms. Agranovich guides her students to develop their individuality and independence in interpretations.  She uncovers hidden potential in every student, who progress very fast and to the best of their capabilities. She also incorporates into her teaching approach her additional studies and experience in psychology, kinesiology, music therapy, and meditation.  Sophia Agranovich is certified as Yoga and Pilates instructor, Life Coach, Holistic Fitness Practitioner and Holistic Health Practitioner. Sophia Agranovich’s  broad range of interdisciplinary studies has greatly enhanced both her performing and teaching, specifically by reducing physical strain and technique limitations, achieving refined states of concentration, focus and inspiration.